RATH YATRA: THE GENESIS AND ESSENCE

I naturally get attracted to depth. Extreme depths of knowledge, love, understanding, draw me without my consent. Academic books seldom gave me solace to the unbearable thirst I had- a thirst to know and dive into the depths of the universe and its mystery around. It's out of the book world and gazing around, I discovered it's all here, in my country. I don't care about people's opinions much because the opinions of people rarely have cut through words into the essence knitted into it. Bharat, aka India, is this unimaginable piece of the subcontinent. Guarded by the mighty mountains in the north that made me feel humility at its utmost, and the oceans all around washing the countries shore, there is no place like this in the entire world! Not only in terms of knowledge, but the intrinsic quality woven into the culture that grew up of this land affirms the fact that this land is very, very different when compared to any other, even today. Just as close as a few centuries ago, this subcontinent was at the crest of economic development and scientific knowledge. Well, the entire nexus to wash this off, and to make the inhabitants of Bharat completely disconnected from its roots is not the context of today's discussion. The more I get into the language, mathematics, music, and arts of Bharat- everything seems to touch one single fragrance, everything seems to lead to one way- the way to touch the peak of human consciousness. It's simply immense. From the outside, it's very aptly noticeable- the geometry of architecture, in the entire scape of the nation, has been crafted by taking into account a very keen subtlety. All the four corners has been sealed nicely with temples- the one on the East- Puri is one of the four dham that is the hub of transformation. A beautiful lore has been set up locking all of them at their places; the rest being Badrinath in the North, Dwaraka in the West and Rameshwaram in the South. A lore is not to be taken as a piece of belief or mythology or any piece of serious history, but several real time facts wonderfully interwoven in an imaginative story. It's only the essence that is important.

Perhaps one of the oldest in antiquity and richest in cultural lineage, the temple in Jagannath Puri is said to be the only temple in the world to have statues of 3 divine entities who are siblings in relation- Krishna, Balaram, and Subhadra. All of them are from the time when Mahabharata happened, almost 5000 years ago.

One of the rhetorics says that Kamsa, the maternal uncle of Krishna, wanted to kill both Krishna and his elder brother, Balaram on the pretext of inviting them to Mathura. He sent a chariot to Gokul to bring them with the charioteer Akrur. The day when Krishna and Balarama left for Mathura on that chariot is celebrated as the famous day of Ratha Yatra, which is celebrated every year on this tithi (according to the Hindu calender, this day is observed on the second day of Asadha month), and this year it is today- the publishing date of this blog. This is also the day Kamsa was killed by Krishna, and it is said that for this humongous victory, Krishna and Balarama took his sister Subhadra for a city ride- the day which devotees celebrate till today. This is among the less popular version.

Although various scholars agree to several versions of the genesis, which is mentioned in Brahma Purana, Skanda Purana, and several other treatises, the widely accepted and rigorous version behind the significance of Puri Jagannath is, however, little different. After the 18 days of the great Kurukshetra battle got over, Gandhari, the mother of Kauravas, lamenting upon the death of her sons, cursed Krishna that he would die in a similar manner. And it happened when one day, Krishna was resting in a forest and a fisherman named Jara (who was Bali in his previous birth, as revealed by Krishna), thinking Krishna's leg to be a hunt, shot him in his leg. There is a spot near the ankle, if hit with sufficient force, can cause immediate death. And in this way, the curse of Gandhari was realized and Krishna left his body, in a very peaceful manner. After this, the lore diverges into two parts to meet again-

(A) The heart of Krishna (still a topic of intense discussions of skepticism and mystery) reappeared to the people of a particular tribe in the East after his half-cremated body was given to the Dwaraka sea. King Indrayumna- (according to the Puranas and the Mahabharata, the son of Bharata and Sunanda, and the ruler of Avanti kingdom, present-day Malwa) on knowing about it, tried to steal the heart of Krishna. On trying to use force, the heart disappeared. Immediately Indrayumna repented this and sought to bring him into this Earthly abode in a different form.

(B) In immense grief, the elder brother and younger sister of Krishna was carried his body which was half cremated and immersed to the Dwaraka sea. Coincidentally, King Indrayumna also dreamt that the body of Krishna has reappeared in the seashores near his kingdom which was in the East. 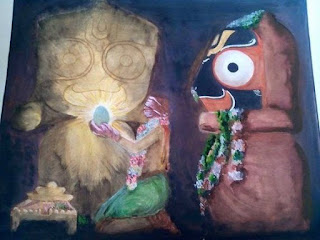 Whatever be the story in the middle, it eventually comes to the point that Indrayumna decided to build a grand temple to keep Krishna forever. On looking for an architect, it is said that Vishwakarma, a symbolism of the ultimate architect of the universe, arrived at that place, disguised as an old man. He asked not to be disturbed while making the temple. Many days passed, but the old man didn't come out from the room he went into- without any food or water. Worried, Indayumna forced the door opened and immediately Vishwakarma disappeared. What he saw was half-built idols of Krishna, Balarama and Subhadra- which is carried even today- the idols have no hands. This is a symbolic interpretation of two aspects- the impatience of the king and the sanctity which was maintained since then. These deities are remade every 12 years as they are made of neem wood which eventually disintegrates. They are to be made again in 2027- with the same incomplete concept.

The Ratha Yatra is one of the famous festivals of Bharat, and one of the 12 major festivals of Lord Jagannath. Ratha or chariot is spoken in this land from time immemorial. From the earliest inscriptions of Rig Veda, to Ramayana, Mahabharata and many other Puranas like Vishnupuranas, Ratha has it's mention in many different contexts and dielects. Interestingly, the descriptions match exactly how Rathas were discovered very recently in Sinauli, on excavation. Some scholars owe the origin of Ratha Yatras to Buddhism, and some to Jaininsm, but this is very evident that the festivity is archaic. Ratha Yatra is also called Gundicha Yatra. It is said that the Jagannath temple magnificently crafted by Indrayumna wasn't accessible to the sinners/untouchables. But the queen of Indrayumna suggested to let it be open to everyone for some time so that even the people from the least neglected background can attain salvation by darshan of the holy idols. This marked the beginning of Ratha Yatra celebration, which is therefore aptly named as Gundicha Yatra.

In modern context, the Ratha Yatra is a symbolism to universal embracing, and dissolving the borders between every caste, creed or religion and just embracing the human beings- as a realization to the fact that fundamentally division exists in the human mind, are human constructs and not in nature. Everyone has equal rights and the working/societal background doesn't matter. To embrace this fact even at a broader scale, the king of Puri himself becomes a sweeper on this festival, thus serving the deity in this form. It is also a slight remainder to the fact that king, peasant, brahmins, Kshatriyas, or whatever that means in modern terms, are human-defined, and it shouldn't necessarily determine the quality of someone's life. This is also a brilliant showcase that is a very fundamental quality of the culture of Bharat- devotion. Devotion not in fear, but by transcending the limits of love- devotion at its highest form. Without devotion in heart, no quality in a human being can really mature beyond an extent. In fact, the humongous number of devotees coming at this auspicious occasion created a global image to such a point that the English word "juggernaut" originated in context to Jagannath which is a metaphorical force regarded as merciless, destructive, and unstoppable by the dictionary.

This occasion concludes into closure on the 12th day, with the re-entry of Lord Jagannath into the temple. In a context, Ratha Yatra can also be a symbolic representation of attaining liberation- the ultimate seeking of any human being. The Kathopanishad (3/3-4) gives a beautiful analogy-

Translation: ‘O Nachiketa! This body is the chariot and this atma (soul, the foundation of life) is its owner, the charioteer. The buddhi (intellect) is its driver. The mind is its reins. The indriyas (sense organs) are the horses pulling the chariot. The objects of taste, touch, etc. are its path. Thus, the atma uses the indriyas and anthkaran (conscience) as a means to enjoy worldly pleasures. Understand in this way’

This is such a beautiful rendition of the entire concept, the juice of life, the core essence of human endeavor and knitted into a festival where millions attend. Ratha or chariot is symbolic to our body and the atman or soul is referred to charioteer. The charioteer is in the chariot is pulled by horses (analogic to our sense organs). It is in between proper coordination of the mind and senses that the charioteer reaches it's destination, i.e., ultimate liberation. This is exactly how I want to justify the title of this blog and the introduction to the same. There is a subtle essence to everything that is held by this culture. One just needs an open and dust-free mind to explore the infinite riches that you can get.

I feel speechless and amused by the sheer intensity of devotees whose hearts beat with the tune of creation and I can stay without an explanation. The phenomenon itself is so unattainable that every silly explanation loses its relevance to someone who experiences it.