Freedom, Liberation, Mukti, Moksha, Nirvana, Samadhi, God - are talks of the town. Talks have led a human mind nowhere close to the states these words try to point to. In the sojourn of intellectual pursuit, the intellect always will face a dead end. It can be made sharper, but just like a pencil can't be sharpened beyond a certain extent, intellectual maturity hence is a symbolic route to surpass the need to sharpen intellect beyond necessity. A mature intellect knows just the necessary limit, just like a mature adult, that a pencil need not be sharpened beyond a certain point to strike through pages effortlessly.

Rukmani was gifted a new mobile phone. She had never been with a phone before, it is a luxury in her village, and she was jolly and continued with her daily tasks effortlessly. Now as she got enamored with the features this phone offered, within a few days, she was seen with the mobile phone at hand for hours on end. Facebook, Instagram, Snapchat, WhatsApp - she thought it was a new degree of freedom, new parts of her personality are expressed through the phone and internet. For months she thrived, with her new personality with social media and incessant chatting apps. She felt as if the phone was her new body part and rather in a distracted way, every now and then, to kill boredom, or whenever she was not with many things to do.

Slowly, in the garb of freedom, of what she felt like freedom, was making her more distracted, impatient, and restless. Because every time she would want to sit under the skies, one notification would pop up onto the screen to take her into a deep dive into the ocean of trash inside her phone, without her even realizing it. She thought she could do whatever she wants with this phone and that her freedom allowed her almost anything at any time. What she didn't know, however, was that she became a slave of the mobile phone, which looked like being free to her.

One day, while she was surfing her phone sitting near the nearby pond, the phone accidentally slipped and fell into the pond. She screamed, tried to get it, but all in vain. She thought she lost everything, she lost freedom, she lost a very dear body part of hers to the waters. She couldn't afford a new one, although she thought of many ways for the same. As days passed, she saw that even if there are no notifications on her phone to pop up, even if there are no WhatsApp messages, she wasn't affected. When she sat by the pond, her hands obsessively wanted for the phone, but without that, she saw she was okay. The tremendous amount of entanglement that she made with the phone and an imaginary plane of socialism and pretension, which made her think she was free, she realized, was bigger bondage than anything. After months, she sensed a tinge of freedom- not having to compulsively abide by the notifications of phone or any gadget whatsoever.

Rudra, from his childhood, was a rebel. Whenever he smelled some dogma anywhere, he got furious. All the established orders of society offended him and he looked down on them as constrictions to his own personal freedom. He was not someone who could be captured in the vicinity of social obligations. Whatever he did, was out of his defined sense of originality. He was seen as a hero figure for the young and teens. The middle-aged didn't care much about him because he had an argument to prove his point for every debate that happened. The old-aged people of the community were annoyed with him because of his despicable attitude to the institutions they had been faithful to, since their childhood.

Many women hence fell in love with him because of his open attitude towards everything. He advocated an open love and was supportive of polygamy and polyandry, not bounded by monogamous marital commitments or constraints of a community, or such societal impositions which he found inhibits the freedom of all the boys and girls. Hence, there was also a shadow of promiscuity that was stabbed on him by the fellow natives. Because of the chaos he created in the social order, he was forced to be extricated from his own town. Whatever it is he felt, the unjust notion of restrictions that human beings imposed on themselves is a sure way to bondage, he felt. He was in open relationship with multiple women, and he satiated his sexual desires in a way he perceived as freedom.

It took him many years to realise that he mistook his compulsiveness of desires as freedom, which was his only source of bondage. He realised that although he has lived a stud life, there had been no depth to it. He enjoyed enormous volumes of sex, but never did he reach the depths of intimacy. It took him a while to realise the illusive nature of reality, where the illusion of freedom grabs a human being into the abyss of bondage, thereby resulting into timeless suffering, sometimes of which the person is unconscious of.

The fancy words we started this blog with, are illusive. Freedom, Moksha, Nirvana etc. are a natural state of any life that lingers around in this gigantic cosmic arena. By default, every being is free but the bondages that starts from birth, when a life experiences a new body, fresh memory, and tons of information to engulf from the senses, bondage starts to build. It is in letting go of the bondages that is the only way. Realising bondages and getting rid of them slowly is stepping towards a full-fledged life not constrained by anything and neither is under the obligation of any force. It is not as easy as it is to say. It needs perseverance, and constant thriving to break free. And this is the ultimate thirst of every life that shackles itself under the web of illusions that this world never fails to supply.

On an ending note, I remember some beautiful lines from the Garbha Upanishad: 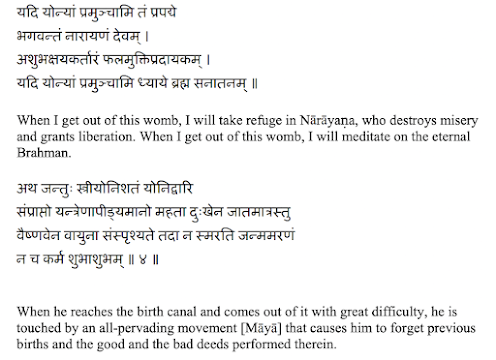 Translation by: Subhash Kak
May you taste freedom! Shambho!